When Given the Choice, Kids Choose Health 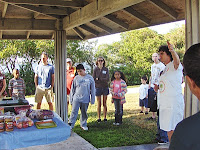 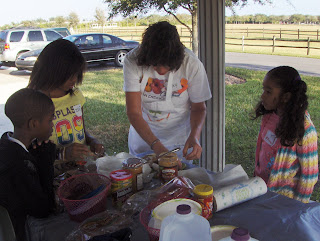 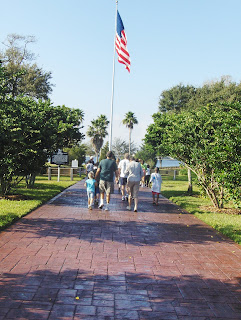 It's chilly in the tropics this morning, as I send prayers to all the people of Haiti. I pray that a strong and powerful infrastructure will be built there so the country can blossom as paradise. I have served many Haitian clients in my work here in South Florida when I worked for Florida Department of Health and each of them is special to me. They are kind, thoughtful, with a very strong work ethic and so full of love for their children and their families. We have much we can learn from them as we serve them in their time of grief and need.

This past Saturday, Growing Healthy Kids held its January 2010 program for some of the "unmatched" children served by Youth Guidance Mentoring & Activities Program. We met on a beautiful morning at Riverside Park for 2-1/2 hours of learning about healthy foods, quiet reflection on the natural beauty and significance of Veterans Memorial Island, and an orientation to the fitness trail. All these kids and most of the adults who attended Saturday live in Indian River County, yet more than half had never been on the fitness trail or to Memorial Island, with its breathtaking views of the Intracoastal Waterway and its solitude.

What delighted me the most was watching children play, watching their expressions when they tried the snack for the first time with smiles popping up all over, and hearing their "yes" when I said several times, "let's jog to the next trail". It was MAGIC!

There were harsh realities. Several children, because they are overweight, do not get enough exercise, and are eating more calories than their bodies need, did not join in at several fitness trail stations. Next month, I will be more deliberate in speaking with the volunteers about being positive role models for fitness. Children watch us. Monkey see, monkey do.

The healthy snack I brought for everyone, thanks to the generosity of Publix Supermarkets, was Growing Healthy Kids PB&B sandwiches, served in the Danish tradition called "open-faced sandwiches". One slice whole grain bread, 1-2 tablespoons natural peanut butter, 1/2 sliced banana, 5-6 raisins. Cut into six pieces. That's it! The bread I used was Arnold's Healthy Multi-Grain Bread because it contains 4 grams of dietary fiber per slice and the first ingredient includes the word "whole" (also known as "the Nancy rule" for choosing breads and pasta - "4 or more and "whole"). The peanut butter I used was Smucker's creamy natural peanut butter, which has no added sugar. By comparison, I showed kids the food label of another national brand of peanut butter well known to kids. This other brand had added sugar and added unhealthy fats. The lesson was "less is more".

When several kids said, "This is really good and I can make this snack by myself," I smiled and said, "Yes, yes!"

Growing Healthy Kids - improving the health - and lives - of children, one garden and one child at a time.