When you go to page 23 of my book, Nourish and Flourish: Kid-Tested Tips and Recipes to Prevent Diabetes, you will find a list of 59 different names for sugar.  The fact is food manufacturers don’t want you to know how much sugar they are putting into processed foods.  The trick is to use lots of different names and kinds of sugar so it looks like there is not very much sugar in the products. If all the different sugars were grouped together as one sugar, then sugar would be the first ingredient listed for many common foods, like cereals, granola and energy bars, since ingredients are listed in order of volume. 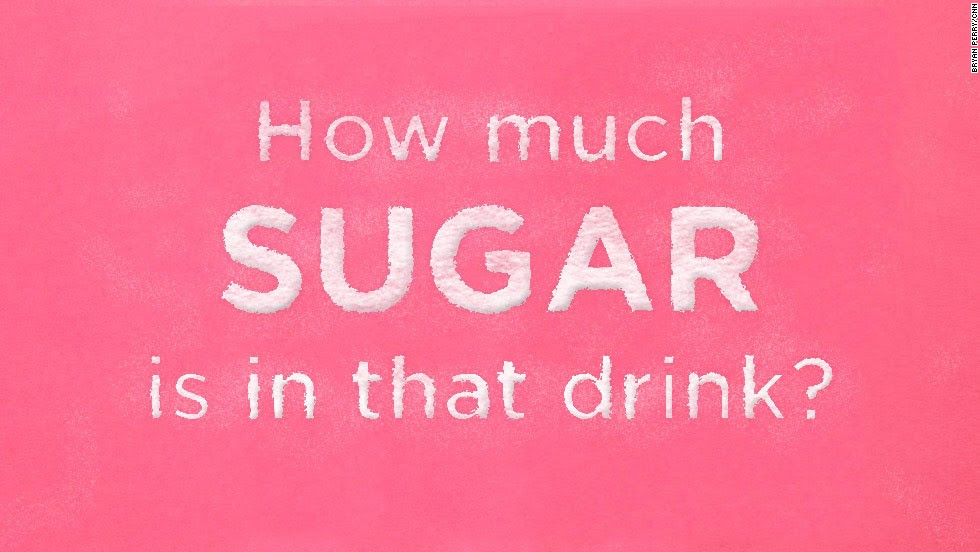 I have written before in Wellness Wednesdays about "The Pop Tart Lesson" that I teach throughout the United States.  Look at a box of Pop Tarts and use the list in Nourish and Flourish to identify the various sugars in the ingredient list.  If all the different sugars used to make Pop Tarts were lumped together as “sugar”, then sugar would be the first ingredient. But Kellogg's, the company that makes Pop Tarts, knows that they can legally get away with making sugar the most common ingredient without having to tell you.  When highly processed sugars, like high fructose corn syrup, are cheap to make, then Kellogg's makes lots of money and your kids get hooked on Pop Tarts and other sugar-filled foods.
Eating too much sugar is a really big problem in America.  Below are four important – and serious - reasons to eat and drink less sugar:

REASON 1:  Obesity.  The numbers and costs are staggering.

So, now what do you do?  Check food labels for sugar.  Cut back on how much sugar your kids are eating and drinking every day.  Take the first step and make healthier choices for you and your kids with your wallet.  Buy foods and drinks with less sugar.  Eliminate all high fructose corn syrup from what you eat and drink.

I will leave you with this:  remember the 1971 Coca Cola song, Hilltop?  Check out the version just released from the Center for Science in the Public Interest.  Click here.

Last month I took a real vacation and traveled to Europe to visit family.  For two glorious weeks I ate my way through Denmark, Germany and Holland with local vegetables and fruits, beautiful fresh breads baked every morning, and my personal favorite, dark chocolate with hazelnuts!   I walked for miles and miles, enjoying the Van Gogh Museum in Amsterdam, downtown Copenhagen, University of Potsdam, and beautiful Tiergarten Park in Berlin.  You can't help but notice that everywhere people are riding bicycles. In Holland there are so many bicyclists that you must pay very close attention or you risk being run over because they are going fast!  One morning while in Holland I took a train from Amersfoort to Amsterdam and asked a young man how to get to the Van Gogh Museum by tram.  He replied he had no idea because he always traveled by bicycle, not by tram. I found the local tourist office and eventually figured out the tram system and got to my destination!

Coming home to the United States, I was instantly overwhelmed by the number of obese Americans everywhere. As adults we can make choices about what we are going to eat or whether we are going to sit in front of a TV for days on end.   It is the children we must protect from the thoughtlessness and carelessness of adults’ bad habits.  The American way of life is killing us with unhealthy, processed foods filled with sugar, salt, and fat.  We think nothing of buying a $25,000 car but we cannot justify $200 for a bicycle.

It is time to rethink about our lifestyle in America.   The contrast of having just been in Europe has sharpened my resolve to create more solutions to the childhood obesity epidemic.  Here are some tips for you:


The fact is that obesity takes years off your life.  It is not acceptable for American children to be facing lifespans shorter than ours. But that is what is happening and will continue to happen when we turn away from all the overweight and obese children in America and pretend that obesity doesn't cause any problems.

If you have tried unsuccessfully to lose weight, then reread the quote at the top of this article.  Growing Healthy Kids is dedicated to raising awareness about the importance of why we need to reverse and prevent childhood obesity in America and creating solutions.

Be a role model for your children and grandchildren.  Do something today to improve your children’s access to healthy foods.  Teach them how to eat less processed foods containing added sugars, fats, and salt. If you need help, then please email me at growinghealthykidsnow@gmail.com.


"They are much to be pitied who have not been given a taste for nature early in life." -- Jane Austen

School is out and summer vacation is here!  Three months of outdoor fun time have arrived and parents everywhere are thinking about how to keep the kids fed.

Here are five of my favorite summer foods for Growing Healthy Kids:

1.       Watermelon.  Teach your young nutrition detectives how to detect a “hollow” watermelon.  Ice the melon down in the fridge overnight, then cut it up for several days of lunches.  Cube some up, freeze it and use the watermelon cubes to flavor some ice water!
2.      Tofu egg salad.  Mash up some tofu, mix with a little olive oil mayo, dried mustard, a dash of turmeric powder, chopped celery, green pepper, and sweet pickle relish.  This makes a great sandwich on whole grain bread or a summer salad on a bed of locally grown greens.  Let the kids make this the night before so the flavors can blend and they can have it for lunch the next day while you are at work!
3.      Fresh sliced tomatoes and sliced mozzarella drizzled with balsamic vinegar.  Top with a spoon of fresh pesto if you have some!
4.      Whole grain pasta salad.  Add sliced grape tomatoes, feta cheese, and grated zucchini to your favorite cooked whole grain pasta.  Make a simple vinaigrette dressing in a glass jar and shake these ingredients together:  2 tablespoons extra virgin olive oil, 2 tablespoons red wine vinegar, squeeze of fresh lemon, some Pink Himalayan Sea Salt and fresh ground pepper.  One of my favorite pastas to use for this salad is Dreamfield’s Rotini.  Make this on Sunday and the kids can have it for several days’ worth of lunches!
5.      Frozen fruit smoothie.  Try this combination for a real refreshing summer cooler:  ½ cup pineapple juice, ½ frozen banana, 1 cup frozen dark cherries, ½ cup kefir (or Greek yogurt), and 3 ice cubes.  Kefir is great for keeping tummies happy!

“We can’t solve problems by using the same kind of thinking we used when we created them.”
-- Albert Einstein

Cooking with spices is something kids learn while making favorite family cookie recipes at holiday time.  But spices are so much more than just cinnamon and nutmeg.  I love cooking with spices.  I always buy organic spices because they just taste better. Keeping a few fresh pots of herbs in my kitchen garden is the best!  Nothing better than snipping off a little fresh basil, oregano or mint to use in a recipe!

The fact is you can replace sugar and salt with nutrient-dense spices.  Check out why you can start learning how to cook with spices:
Spices add great flavor to your foods.
Spices increase your mental focus.
Spices can speed up your metabolism.
Spices can reduce inflammation and help prevent diseases like Alzheimer’s.

Use these 6 spices to start bringing fresh flavor into your meals and pop up your health:
1.      Ginger:  Add a teaspoon of chopped fresh ginger to a cup of hot tea to reduce muscle pain after exercise.
2.      Thyme:  Add a couple of teaspoons of dried thyme to soups and stews to help protect against food-borne bacteria and to lower blood pressure.
3.      Rosemary: Sprinkle a tablespoon of fresh rosemary (or a teaspoon of dried) on roasted potatoes or grilled protein to boost your mental focus.
4.      Crushed red pepper flakes: Add a teaspoon or two into pasta sauce or chili to strengthen your immune system and increase your metabolism.
5.      Cinnamon: Add up to a half teaspoon a day to oatmeal, cereal, yogurt, coffee or hot cocoa to help control your blood sugar and lower your bad cholesterol.
6.      Turmeric:  Adding fresh or dried turmeric to soups and sautéed vegetables helps reduce inflammation and may help prevent Alzheimer’s.

Always buy spices is small quantities until you know how much you are going to use.  You never want to buy more than a year’s supply!

Solving the childhood obesity crisis means taking conscious effort to improve our health, our children’s health and the health of the children in our circles of family and friendship.  I write Wellness Wednesdays to educate parents and adults how to create healthy and delicious foods for themselves and for their children and to convey how much fun it is to eat healthy foods and to be physically fit!