Tribute to a Hero

On August 7th, a 64-year old champion for children made his transition. This man was one of the first people I worked with when I first conceptualized the national partnerships I wanted for Growing Healthy Kids, a young organization dedicated to reversing childhood obesity. Inspired by an article in Kiwanis magazine, I made it my goal to meet the local head of Boys and Girls Clubs of Indian River County. It took a couple of calls to pin him down to a date when we could meet. We finally met at the old Vero Beach Boys and Girls Club in a dilapidated building on 27th Avenue, where children played right next to a dangerous roadway. The rooms in the rented building had terrible acoustics, especially when filled with energetic kids spending their transition from school to home while their parents worked 2 and 3 minimum wage jobs to make ends meet. He wore a button-down white shirt and dress pants.

A quiet man and a great listener, I gave him the proposal from the Growing Healthy Kids organization: volunteer at the two Boys and Girls Clubhouses on opposite ends of Indian River County once a week for the next nine months, build teaching gardens and conduct weekly healthy eating classes with vegetables we would grow. Teach the kids how to be leaders in eating healthy and being active. Take the kids on field trips to meet with chefs and visit local farmers. It took him about 5 minutes of listening and asking me why I wanted to do all this for him to say "yes" to the proposal.

We did all those things and more because it was always “Fun with a Purpose”. Our purpose? To reverse childhood obesity in Indian River County and beyond.

His only request was that the Growing Healthy Kids program, in creating a partnership with Boys and Girls Clubs of Indian River County, employ his philosophy, “ Fun with a Purpose”. He agreed to let us build small raised bed gardens, where over the course of the next nine months, we created magic for kids, many of whom moved once every month or two because their parents were recently unemployed. Our weekly healthy cooking classes became a popular class with the kids screaming with excitement because it might have been the best-tasting food they'd had all week.

When I first learned of the Executive Director’s illness, I sensed it was serious. Several times I called so I could update him on our progress and plan for the next phase. Each time, I was told he was on an extended medical leave but I could meet with the program director. Then, earlier this year I was a speaker at the Quail Valley Rotary Club and learned that he was not only a Rotary member, but also slated to be the incoming president. The officer said this quiet man had called him to ask that someone else step into the incoming presidency role. I was saddened that this man’s life-threatening illness was robbing him not only his day-to-day work providing a solid, safe base for success for so many children in Indian River County but also his passion for being a community leader.

Good-bye, Ronnie Hewett. You inspired me to create programs and lessons where “Fun with a Purpose” is the driving force. You are my hero. Thank you. On behalf of all the children whose lives the Growing Healthy Kids project has touched, thank you.

Rest in peace, Ronnie. You will be missed.

We want ideas from the kids about what being healthy means to them. So we are extending the deadline to September 30, 2011 for the 1st Annual Growing Healthy Kids Poster Contest!

The theme is "Healthy Eating...Healthy Me". Any medium can be used on an 8-1/2" x 11" paper. The theme words must be included as part of your poster. Prizes include Publix gift certificates, personalized herb gardens, and T-shirts printed with your design.

Help us reverse the childhood obesity epidemic. Kids' voices can help teach others. 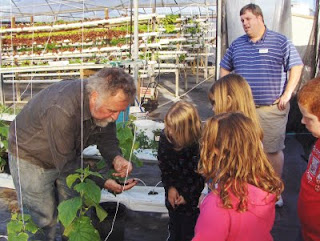 (Photo is from a GHK field trip to visit a local hydroponic farmer in Grant, Florida)

Growing Healthy Kids is a movement to improve the health - and lives - of America's - and the world's - kids, one child and one garden at a time.

It's soon back to school for the kids in the next few weeks. It's back to the basics for you parents.

Growing Healthy Kids is a movement to not just halt and prevent, but to reverse childhood obesity. The only way this will happen is if you are crystal clear on why the health and lives of children who are obese are threatened.

Stop pretending that there are no overweight and obese children in our communities and in our own families. According to our national health department, CDC, approximately 17% of all children in the U.S. between 2 and 19 years old are obese and one in 7 low-income preschool aged children is obese. ONE IN SEVEN. Not good.

The childhood obesity crisis will not be solved until we adults learn some things (hence, today's lesson). When 2 in 3 adults are overweight and obese, we are the problem.

Start by figuring out your own Body Mass Index. The BMI is not perfect and there are some limitations. However, it is an excellent reference to begin making choices.
If you don't know your BMI number, go to www.cdc.gov for a BMI calculator. All you need is your height and your current weight.

Are you at a healthy weight? Yes or no?

If not, then pay attention. Make your first goal to not gain any more weight. Use smaller plates. Use half as much butter. Switch from 2% milk to skim milk. Eat more vegetables and fruit. Pick at least one of these things and do it starting today.

Growing Healthy Kids is a movement to improve the health - and lives - of America's - and the world's children, one garden and one child at a time. Do your part. Be the solution.

Love to you all,
Nancy Heinrich
Founder, Growing Healthy Kids